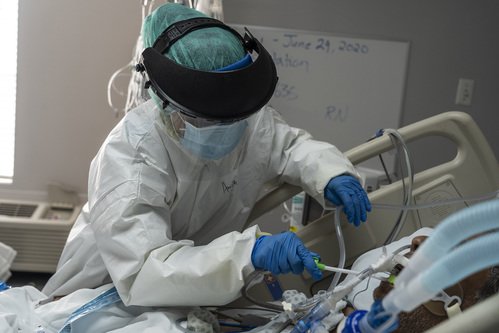 As coronavirus cases make a massive surge across the country, Americans head into this Fourth of July weekend facing increased restrictions on traditional activities like going to the beach, joining friends at a bar and flocking to watch fireworks.

Public health officials are warning people not to let down their guard just because it’s a holiday.

“We don’t want any more closures, but our numbers are going through the roof,” Dr. Cameron Kaiser, public health officer in Riverside County, California, said in a news release. “We started seeing more and more cases after Memorial Day and we can’t afford another jump after the Fourth of July.”

“We cannot risk having crowds at the beach this holiday weekend,” Janice Hahn, a member of the Los Angeles County Board of Supervisors, said in a tweet.

In hard-hit South Florida, beaches from Palm Beach to Key West will be shut down for the holiday weekend. The city of Key West explained why: “To avoid large crowds gathering during this Covid-19 pandemic.”

One hopeful note came from the other end of the country: New York City beaches have opened for swimming.

While other cities canceled fireworks to keep people from crowding together, places like Los Alamitos and Seal Beach, California, got creative. They’re jointly holding a “Drive-Up 4th of July Fireworks Spectacular” that bans pedestrians and includes temperature checks.

Nineteen states have changed or paused reopening plans because of spikes in coronavirus cases, and bars have come in for particular attention.

Texas Gov. Greg Abbott closed most bars closed a few days ago, saying they contributed to the alarming spike in cases in the state.

California Gov. Gavin Newsom has ordered bars in seven counties to close over the weekend and said he will announce more restrictions on Wednesday.

Colorado shut down bars and nightclubs and Delaware Gov. John Carney closed bars at state beaches ahead of the weekend.

Dr. Anthony Fauci, the director of the National Institute for Allergy and Infectious Diseases, gave bars nothing to cheer when he appeared before Congress this week.

Study says deaths may be underestimated

Official Covid-19 death counts in the United States may underestimate the fatalities linked with the pandemic, according to a new study.

The study, published in the journal JAMA Internal Medicine on Wednesday, found that the number of “excess deaths” that have occurred so far during the pandemic, between March and May, is 28% higher than the nation’s official number of deaths attributed to Covid-19.

“The gap between reported COVID-19 deaths and excess deaths can be influenced by several factors, including the intensity of testing; guidelines on the recording of deaths that are suspected to be related to COVID-19 but do not have a laboratory confirmation; and the location of death,” the researchers wrote in the study.

The “dimmer switch” approach some mayors and governors are taking to contain the spread of coronavirus in their cities and states — like slowing down the reopening of restaurants — will not work for areas of the country seeing a large increase of new coronavirus cases, CNN contributor Erin Bromage said.

Speaking Wednesday on “CNN Newsroom,” Bromage, an associate professor of biology at the University of Massachusetts Dartmouth, said that states like Arizona, Texas and Florida need to take stronger actions.

“The dimmer switch approach works when you have case numbers under control,” Bromage said. “We saw New Jersey, we saw New York governors both say we might slow down on reopening restaurants — that’s a dimmer switch.

“When you get into Arizona numbers, Texas numbers, Florida numbers, that tiny adjustment that you make is not going to have the effect on turning those new infections around fast enough. You’ve got to come in with more of a hammer rather than a switch to control this now.”

New York City Mayor Bill de Blasio said Wednesday that a return to indoor dining in the city, originally scheduled for July 6, will be postponed.

Fauci offered a bleak warning in his testimony: Americans need to take sensible measures to curb the spread or risk seeing 100,000 new cases a day.

“We are now having 40,000 cases a day. I would not be surprised if we go up to 100,000 a day if this does not turn around,” he told the Senate Health, Education, Labor and Pensions (HELP) Committee hearing.

Turning it around will take a coordinated, collaborative effort, he said at the hearing, not the “disparate responses” the nation has shown so far.

But without strong national leadership, that coordination may be up to mayors and governors, according to Dr. William Haseltine, a former biotechnology executive and professor at Harvard’s medical and public health schools.

“This situation is now so grim and is getting worse by the day,” he said. “From now on, they know it’s in their backyard and their job to take care of it if no one else does.”

Most of the US has the pandemic in their backyard, with only two states — New Jersey and Rhode Island — showing a downward trend in cases from last week. The surge comes as restriction-fatigued Americans increasingly gather in large groups for summer recreation.

Several states have experienced spikes in cases. Arizona, one of the hotspots, on Wednesday reported 4,878 new cases of Covid-19 as well as 88 deaths from the disease over the last 24 hours, state data shows.

Those numbers are a new record high for both new daily cases and deaths since the state started posting data publicly in mid-March.

Officials in California and Florida — two states where coronavirus cases are jumping — are taking different approaches toward reopening amid spikes in infections.

Florida Gov. Ron DeSantis told the reporters that there’s no going back to stricter measures, while Gov. Newsom in California hinted that on Wednesday he’ll tighten restrictions this Independence Day weekend, especially at beaches.

As the holiday weekend looms, Newsom warned that family gatherings — where households tend to let down their guards mixing with extended family — are the greatest concern.

“It’s not just bars, not just out in the streets with people protesting, and the like,” Newsom said.

Newsom ordered bars in seven counties to close over the weekend and said he will announce more restrictions on Wednesday.

Newsom has repeatedly promised that reopening the state comes with the ability to “toggle back” if necessary.

In Florida, DeSantis assured reporters that his state can deal with the uptick in cases and it’s not necessary to shut down shops and restaurants.

“We’re not going back, closing things,” he said. “I mean, people going to business is not what’s driving it.”