If elections are won by defiant showmanship alone, Donald Trump, the grand political illusionist, will waltz to a second term in November.

In the most politicized State of the Union address in modern times, the President took the choreography of an annual America ritual to new levels on Tuesday night at a fraught moment in the nation’s history.

And he spelled out a daunting warning to a band of Democrats who couldn’t even cobble together a winner in the Iowa caucuses on Monday that he’s an effective, relentless political communicator who will stop at nothing to win.

In two stunning moments that book-ended the evening, Trump, as he began his speech, turned his back on House Speaker Nancy Pelosi’s outstretched hand in a snub that encapsulated their boiling bad blood. Then, after he wrapped up, Pelosi, channeling her disgusted and outraged Democratic members, ostentatiously tore up the speech in full view of the cameras, in a sure-to-go viral moment that showed she can do theatrics, too.

Trump rattled through the night in a mood of huge self-confidence, taking political risks a more conventional politician would have spurned. It wasn’t the performance of a President shamed and cowed by impeachment ahead of a vote in the GOP-led Senate expected to acquit him on Wednesday.

He painted a vision of a prosperous unified American utopia, pulsating with racial harmony and common national purpose, leaning heavily on the strong economy and the lowest unemployment rate in 50 years.

But in hitting hardball notes on abortion, immigration, religion and awarding a Medal of Freedom to talk show king Rush Limbaugh on live TV, the President made his most brazen political base play yet.

Fusing the roles of commander in chief and reality show host, the President orchestrated a moving reunion between a soldier home from the Afghan war and his unsuspecting wife and children — in a prime-time version of the YouTube videos that you can’t take your eyes off.

This and other gestures, including his award of a scholarship to a young minority student to attend school under a controversial administration program, were touching and emotive. But they also were a trap for critics who risked coming across as callous if they accused Trump of cynicism.

The President proclaimed that the “state of our union is stronger than ever before” — boasting of standing up to China, winning with new trade deals and bringing torrents of jobs back to their rightful home.

He conjured the kind of “America First” toughness, populist rhetoric and refusal to stand with elites against the heartland that powered his 2016 triumph and which he is ratcheting up ahead of November’s election.

He used his most valuable card — the strong economy — skillfully and at length, boasting that he “shattered the mentality of American decline” and was building the world’s “most prosperous and inclusive society.”

His millions of supporters will have seen more than enough to get them flocking to the polls in droves in November — even as doubts emerge about the unity and competence of Democrats following the Iowa caucus debacle.

But as is often the case with Trump, the reality that he sketched was often at odds with the facts. His 80-minute appearance was pockmarked with exaggerations, falsehoods and misleading rhetoric.

He effectively accused Democrats of seeking to steal the health care of Americans with socialism and portrayed himself as the protector of coverage for pre-existing conditions. But his administration has made repeated attempts to kill off Obamacare, the law that initiated those protections.

He boasted of building over 100 miles of a “long, tall and very powerful” wall on the US-Mexico border. Yet most of that construction is in replacing dilapidated barriers with an enhanced wall system.

The trade deals he touted, like those with China, Mexico and Canada, are far less sweeping than his extravagant claims.

Yet Trump also put himself across as a rare politician who keeps his promises — a powerful source of attraction for his supporters and an appeal to suburban uncommitted voters who he needs to convince he is worth a second term.

“Tonight, I stand before you to share the incredible results. Jobs are booming. Incomes are soaring. Poverty is plummeting. Crime is falling. Confidence is surging. And our country is thriving and highly respected again,” the President said, in a unifying opening to his speech.

He seized on the economic success of his presidency to parallel Ronald Reagan’s “Morning in America” mantra from 1984 — implicitly warning Americans they could jeopardize it all if they turf him out of office.

But Trump also reeled off a series of blistering politicized passages that the conservative but temperamentally gentle 40th President would never have included in a speech that typically has reached for a common national ground — even while being a laundry list of political priorities.

For much of the time, Trump twisted his body away from Democrats to address only the Republicans in the House of Representatives, leaving members of the House majority, shaking their heads, apparently unable to believe their ears.

At one point, Trump paused for first lady Melania Trump to honor Limbaugh with the Presidential Medal of Freedom.

“El Rushbo,” who announced to his millions of listeners on Monday his stage 4 lung cancer diagnosis, is regarded as a bigot and extremist by many Democrats. His populist streak and mastery of flaming political rhetoric was in many ways a precursor to the President’s own political brand.

There were several cries of “no” as Trump announced the honor, encapsulating the disbelief of many Democrats captive in their seats.

“In one fell swoop, Trump delivered a speech worthy of the worst demagogue and turned his constitutional obligation to inform Congress about the state of our union into an episode of reality television.

“He even awarded our nation’s highest civilian honor, not to the real American hero in the gallery — one of the last surviving Tuskegee Airmen — but a conservative media personality who has done as much as Trump himself to divide our nation. It was a shameful display,” Biden said.

“This is not the place for a MAGA rally,” Van Hollen told CNN. “This is a place where you at least attempt to bring the country together to unify us behind common purposes. Instead, we have a President who’s a megalomaniac.”

The Democratic governor of Michigan, Gretchen Whitmer, had the worst job in politics — responding to a State of the Union address.

The task was especially hard on Tuesday as she was trying to respond to Trump’s flamboyant, non-traditional approach with the conventional imagery of a regular politician’s televised speech.

And she quarreled with Trump’s vision of runaway American prosperity.

“American workers are hurting … Wages have stagnated, while CEO pay has skyrocketed.”

“The truth matters. Facts matter. And no one should be above the law. It’s not what those senators say tomorrow, it’s what they do that matters,” she said.

If the election is about facts, policy and in-depth discussion of the issues like health care, economic equality and a return to political norms, then voters may well turn to Democrats over Trump.

But if it’s about a brazen willingness to put on a show, the President’s challengers are already in trouble. 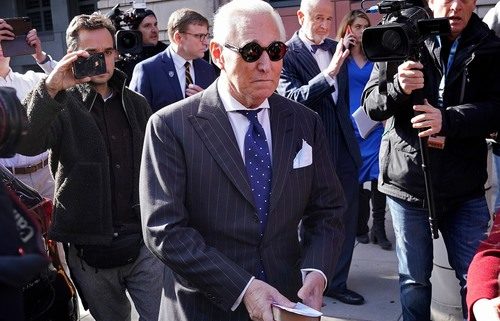