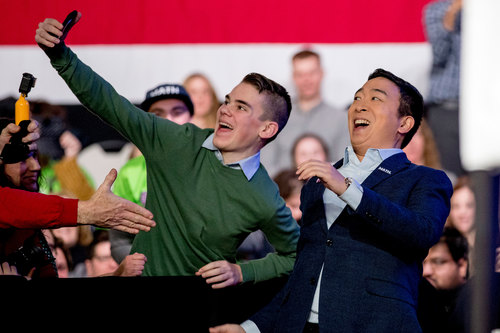 Vermont Sen. Bernie Sanders is hoping to declare the sort of decisive victory that could turn the entire Democratic presidential primary in his favor Tuesday in New Hampshire.

Former South Bend, Indiana, Mayor Pete Buttigieg aims to stop him and force another close tally after their near-tie in the Iowa caucuses eight days ago.

Former Vice President Joe Biden is just looking to avoid disaster, while Minnesota Sen. Amy Klobuchar looks to leapfrog him and emerge as a surprise contender as the campaign moves to Nevada. Massachusetts Sen. Elizabeth Warren, meanwhile, needs a strong showing in her neighboring state to generate the sense of momentum her campaign has lacked in recent weeks.

Sanders didn’t get the result he wanted in Iowa, but New Hampshire — a rural state with an independent streak that handed him a 22-point victory over Hillary Clinton in 2016 — is his wheelhouse.

With so many candidates on the ballot, the margins will be much smaller this time around, but Sanders and his campaign do not want to leave here without having delivered a victory speech. In primetime. With supporters sending donations to match every applause line.

Every recent poll of the state shows the senator from neighboring Vermont with a significant, if not runaway, lead over his nearest rival, Buttigieg.

The pair have jousted over the last week following their narrow 1-2 finish in Iowa, where their respective campaigns claimed the top slot in an as-yet unresolved contest.

But for Sanders, New Hampshire has to be different. There can’t be any doubt.

A loss to Buttigieg, who is trying to establish himself as the moderate standard-bearer, would hang a dark cloud over Sanders’ campaign as the contest heads west for Nevada’s caucuses.

Sanders figures to do well there, owing to his significant advantage with Latino voters, but anything less than a clear win in New Hampshire would upend the Democratic primary and potentially plant damaging doubts with some of his softer support: specifically, the voters who believe he is the best candidate to reclaim the white working class from President Donald Trump in November.

Biden’s campaign has long depended on turning a base of black voters into a win in South Carolina and a huge delegate haul on Super Tuesday.

But after a fourth-place finish in Iowa, it’s not clear whether he can survive another weak showing and keep that base intact.

To fix his problems, Biden tried several messages in the closing days in New Hampshire. On Saturday, he lambasted Buttigieg’s limited experience as a small-city mayor in the most negative ad of the Democratic race to date. On Sunday, he scrapped those attacks in favor of a message focused on morality. And on Monday, he opened the day telling voters how he’d try to reclaim a strong economy from Trump.

It felt as if his campaign might have been trying every option it had to see if any worked.

Biden has already set expectations for a loss here. On Friday, he predicted — to a national audience, in his first answer of a debate — he’d “probably take a hit” in New Hampshire, too.

But a strong second-place finish is much different than a distant fourth or fifth.

Biden already lags behind several of his rivals in fundraising, and former New York City Mayor Mike Bloomberg’s presence in the race looms over Super Tuesday. Money drying up after another weak finish might be the most immediate threat to his campaign.

Buttigieg, fresh off the news that the Iowa Democratic Party has awarded him the most delegates from last week’s caucuses, has seen a substantial boost in New Hampshire.

Polls in late 2019 found him barely in the double digits there — a CNN/University of New Hampshire survey in October put the former South Bend, Indiana, mayor at 10%. But after the Iowa caucuses, Buttigieg saw a surge; the last CNN tracking poll now has the mayor at 22%.

By comparison, Sanders has enjoyed a consistent lead in New Hampshire.

So, the question for Buttigieg on Tuesday is simple: Can he turn in a second-place performance and how close can he keep things with Sanders?

The two have turned up the attacks ahead of the primary — with Sanders knocking Buttigieg for taking money from wealthy donors and the former mayor responding by casting the Vermont senator as too extreme and unbending for most voters.

Buttigieg has touted his Iowa results in New Hampshire, but he has also looked to flatter the New Hampshire voters by describing them as people who “famously think for” themselves.

But he is hoping the state listens — even a little — to Iowa.

She’s been relentlessly on message, preaching electability and personal durability while spelling out her signature root-and-branch plans for reforming a corrupt federal government.

But Warren underperformed in Iowa, a state where many believed she had the savviest field operation, and only just reached double digits in CNN’s final pre-primary poll of New Hampshire.

The Massachusetts senator doesn’t need a miracle here; just a “strong enough” showing, as her one of most devoted backers, Progressive Change Campaign Committee co-founder Adam Green told CNN this weekend, to give her a lift as the contest moves west.

On the trail, Warren has told crowds to keep the faith — that she’s been in “unwinnable fights” before and overcome the odds.

“I started out down 19 points, and I had never run for anything before. But every time I got knocked down, I got back up,” Warren said of her 2012 campaign to unseat incumbent Republican Sen. Scott Brown. “And I got knocked down again and I got back up. Even on Election Day, people were saying, too close to call, not sure if we’re going to do this. I beat him by seven and a half points, there’s another unwinnable fight.”

Her chances of pulling off that kind of comeback in the Granite State appear slim. But what she can’t afford — perhaps literally, given the fundraising implications — is to fall out of the top tier, which would mean being overtaken by both Biden and Klobuchar.

Buttigieg and Biden will be closely watched — but both have paths forward in the Democratic race.

The moderate candidate with the most riding on Tuesday’s primary is Klobuchar.

She finished fifth, on Biden’s heels, in Iowa. If her strong debate performance Friday night, when she pointedly questioned Buttigieg’s experience, catapults her as high as third place in New Hampshire — possibly ahead of the former vice president and Warren — it would scramble the Democratic race.

Klobuchar won the most votes when a little more than two dozen New Hampshire residents in three tiny townships — Dixville Notch in the state’s northern tip, nearby Millsfield, and Hart’s Location, further south and tucked in the White Mountains — cast their ballots shortly after midnight on Tuesday.

Klobuchar’s path forward without a surprisingly strong finish in New Hampshire is murky: She has virtually no support among non-white voters who are set to play a much larger role in the Democratic race starting in Nevada, and her late rise hasn’t allowed her to build the kind of campaign organization in Super Tuesday states that other contenders have.

At least two other candidates in the moderate category appear to be approaching the ends of their roads. Colorado Sen. Michael Bennet, who focused on New Hampshire with little to show for it in the polls, hasn’t qualified for a debate since last summer.

And former Massachusetts Gov. Deval Patrick, a late entrant to the primary, hoped his neighboring state would give him a boost and carry him to South Carolina — where his bet was that Biden would collapse and leave him an opening to win over black voters. But New Hampshire may underscore the difficult of getting into a race months after others began campaigning.

Entrepreneur Andrew Yang, along with Buttigieg, was arguably the biggest surprise of the 2020 primary.

He rose from true obscurity — when he told his family he was planning to run for president, some replied with, “President of what?” — to garnering a devout and unique following online. His focus on a universal basic income has given his campaign the sort of animating cause that eluded some of his rivals.

But that is largely where the success ended.

Yang finished with 1% in Iowa and did not receive a national delegate. And his campaign had to lay off staff in the days following the caucuses there, signaling that, despite Yang’s online fundraising prowess, money could be tightening.

“If we don’t show as well in New Hampshire, there will be some reassessment,” said a Yang aide, “especially if it ends up being the worst-case scenario.”

Hawaii Rep. Tulsi Gabbard all but moved to New Hampshire in late 2019 — renting a house to make it easier for her to hold events nearly every day in the Granite State.

The strategy has made her one of the most omnipresent candidates in New Hampshire, with the congresswoman even inviting supporters to go snowboarding with her this winter.

But that ubiquity has not shown up in polls. Gabbard had 5% in the latest CNN tracking poll of New Hampshire, far behind the top tier of candidates.

She barely registered in Iowa, meaning any long-shot bid by the lawmaker is fully dependent on her finish in New Hampshire.

“Being able to spend time here in New Hampshire, we’re able to campaign through old school, grassroots campaigning and be competitive,” Gabbard said, knocking the complex nature of the Iowa caucuses. “That’s why we made this decision.”

On Tuesday, Gabbard will find out if that bet was worth it.