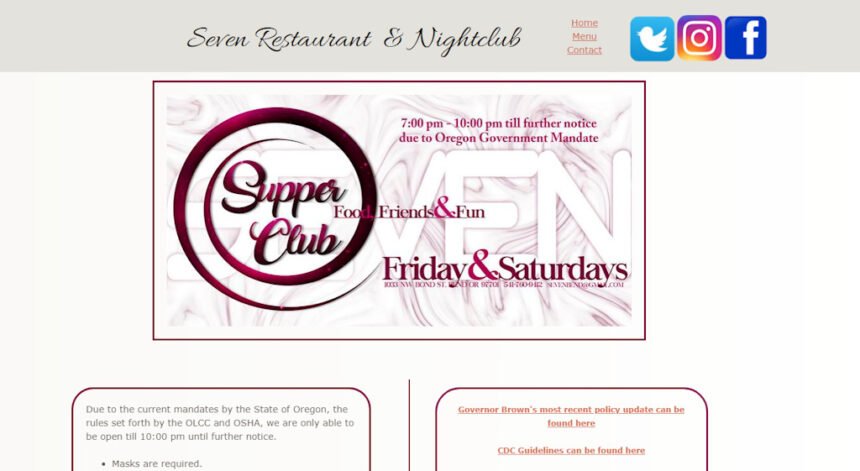 OLCC officials noted the licensee had been reprimanded this past summer for not following social distancing and face covering requirements.

The agency said the patron reported to health officials that it was “well-known” that Seven Nightclub was not enforcing social distancing and face mask requirements.

The business, which holds a full on-premises sales liquor license, is not allowed to sell or serve alcoholic beverages for on-site consumption, effective immediately, OLCC said.

The restaurant-nightclub could not be reached by phone for comment. But the restaurant and nightclub's website indicates they are only open as a "supper club" from 7-10 p.m., due to state mandates, and has several link to state and federal COVID information and guidelines.

Seven Nightclub was cited for two violations of the Governor’s Executive Order. The first violation is for not complying with the Oregon Health Authority’s (OHA) Statewide Mask, Face Shield, Face Covering Guidance. The second violation is for violating OHA's Phase Two Re-opening Guidance for Restaurant and Bars requiring a six-foot distance between individuals in the bar – employees and patrons.

On Oct. 30, after receiving the information provided by Deschutes County Health Services, an OLCC inspector called the licensee to explain that a positive COVID test had been linked to their establishment. The inspector suggested, and the licensee accepted the offer to come to the premises to check the licensee’s operations to make sure it was operating compliantly.

Around 8 p.m. that night,, an inspector arrived at Seven Nightclub to discover patrons who were clustered at the bar, and not social distancing or wearing face masks. The bar manager relayed that she was not aware of all of the rules and asked for assistance. The inspector provided some initial guidance and promised to return the following day before the business opened to review the Oregon Health Authority’s guidance for bars and restaurants.

The next day (Halloween), prior to Seven Nightclub opening, an OLCC Inspector met with the bar manager and employees providing and reviewing with them copies of OHA Phase Two Re-opening Guidance for Restaurant and Bars and OHA Statewide Mask, Face Shield, Face Covering Guidance.

The inspector walked through the premises with the manager, discussing possible layout modifications to create social distancing and reminding the manager about the requirements to sanitize “touch points” after one party of people leaves an occupied area before another party occupies the space.

Additionally, the inspector asked the manager to ensure that the bar staff would monitor the number of people entering the establishment.

Later that evening, the inspector returned to discover that patrons still were not social distancing or wearing face masks. The inspector also noted that none of the sanitization requirements or physical modifications that had been discussed earlier that day had been implemented. The inspector contacted the manager, who acknowledged the lack of control over their patrons, OLCC reported.

OLCC inspectors began working with the licensee this past July, when an inspector twice two verbal warnings for not social distancing or wearing face masks. Separately, Deschutes County Health Services has issued several warnings to the licensee in regards to these issues, including most recently on Oct. 30.

In response to these issues, the OLCC on Thursday issued the operator of Seven Restaurant and Nightclub an order of immediate suspension for failing to follow OHA’s face covering and reopening guidance for restaurants and bars.

The licensee of record is Se7en Group Inc.

The OLCC said its investigation is continuing, and the licensee faces the possibility of additional charges not related to the immediate suspension. The licensee is entitled to an administrative hearing to challenge the OLCC’s actions.

For now, though, the business may continue to serve food for takeout or delivery, but is not allowed to sell any alcoholic beverages.