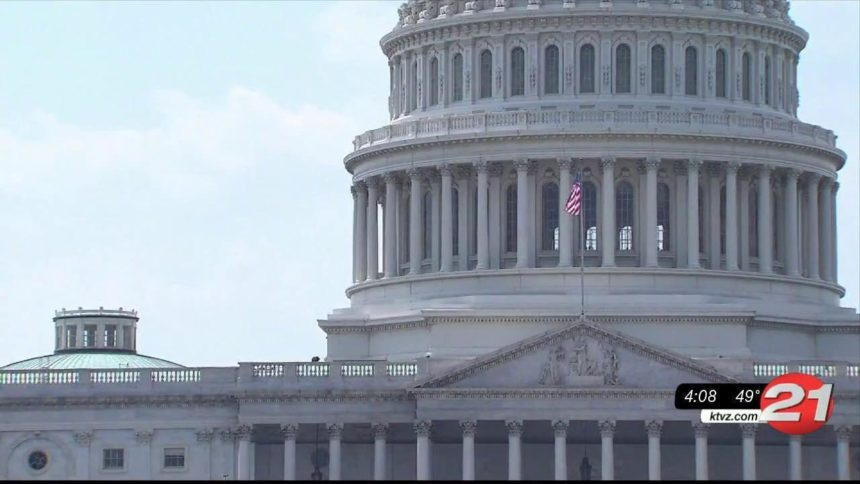 WASHINGTON (KTVZ) -- Oregon's two U.S. senators issued statements after their vote Wednesday in support of President Trump's removal from office, after the Senate acquitted him on a largely party-line vote.

“Today I voted to remove Donald Trump, for his abuse of power and obstruction of Congress. His whole defense amounted to a fiction. The president was not fighting corruption in Ukraine, he was causing it.

“There is no doubt in my mind that Donald Trump misused his office to extort a foreign nation to drum up sham investigations of his political rival.

“Donald Trump has declared himself above the law, and Republican senators have voted to let him run wild, no matter the cost to our nation. They are now on the record saying politicians can get away with selling out American interests to rig an election. There is no check on politicians willing to fracture alliances, fabricate investigations and amplify foreign propaganda if it serves their political or financial interests. I hope our democracy is strong enough to survive this shameful result,” Wyden said.

“Today, is a dark, tragic day for our nation. Today, the United Stated Senate completed the first cover up in this institution’s more than two hundred year history when the majority of my colleagues voted not to convict and remove Donald J. Trump from office.

“As many of my Republican colleagues have admitted in recent days, the House Managers proved their case that President Trump used our country’s vast power in an attempt to smear a political opponent and corrupt the integrity of our upcoming national election. These acts are not merely ‘inappropriate,’ like lying to the public, shunning our allies, or pressing foreign governments to patronize your properties.  No, what President Trump did was to direct a corrupt conspiracy that comprised a fundamental assault on our Constitution.

“Today’s vote, and the Senate’s abdication of its responsibility to rein in an out-of-control President is a devastating blow to the norms and institutions, and the checks and balances that have laid at the heart of our Constitution and American democracy since its very founding. Yet we must remember that this outcome does not come in a vacuum. It’s just the latest in a long list of examples of our government being systematically rigged by one party for the benefit of the powerful and privileged.

"Decisions in the Supreme Court like Citizens United, and Shelby County, and Rucho vs. Common Cause have repeatedly given more power to the powerful, and trampled government of, by and for the people. And efforts like stealing a Supreme Court seat and refusing to allow amendments to legislation have only served to erode the Senate’s constitutional powers and authority.

“The Senate majority’s refusal to hold a full and fair trial, its blessing to the president to use the powers of the government to attack his political opponents, and its decision to cover it all up are a blow to the heart of the separation of powers. They are a blow to the very idea that We the People are in charge.

“Government of the people, by the people, and for the people is not a birthright.  It is a precious gift bequeathed to us by those who came before us. It will take the goodwill and good faith of the American people to maintain it. I believe in our constitution, I believe in checks and balances, I believe in We the People.  If we are going to leave future generations of Americans the same gift we received, all of us are going to have to fight like hell to restore and defend it.”

Merkley also announced that he will be introducing legislation next week that would require the Senate to consider evidence and hear from witnesses in future impeachment trials.

“A trial without witnesses and documents is not a fair and full trial – it’s a cover-up. Whether information from relevant witnesses and documents should be considered in the course of a trial should never be a partisan question. That’s why, following the conclusion of this trial, I will be introducing legislation that would ensure the right of both sides to call relevant witnesses and introduce relevant evidence in any future impeachment trial. By voting down documents and witnesses, the Senate has failed to conduct a full and fair trial, and has set a dangerous precedent. This must never happen again.

“Impeachment is a key tool that goes to the heart of our constitutional system of checks and balances. The Senate must never fail its constitutional responsibility in this manner again,” Merkley said.

“In December, I opposed both the House vote to impeach President Trump and the vote to send the articles of impeachment to the Senate. I felt that the justifiably high standards for overturning the outcome of an election had not been met. Nullifying the vote of the American people demands two things: a bipartisan and fair process to determine wrongdoing, and a criminal offense worthy of overturning the outcome of the voters’ will. Neither of which has occurred.

“If facts matter, and I believe they do, then the House impeachment managers failed to prove the existence of any criminal offense. Overturning the outcome of a presidential election is a big deal and should not be undertaken to settle a partisan political grudge.  The House managers failed to make their case.

"In the end, this partisan exercise only failed the American people and many important issues have been on hold during this process. It is long past time for Congress to get back to the work of the American people, like lowering prescription drug prices, solving surprise medical billing, continuing the fight against the opioid epidemic, and improving forest management policies to address catastrophic wildfires.  It is time to move on.”