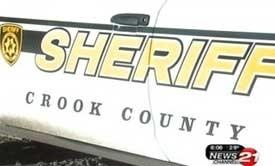 PRINEVILLE, Ore. (KTVZ) – A Silver Lake man hunting in the Ochocos with friends was killed Monday night when a tree fell and crashed down onto his camp trailer, Crook County sheriff’s deputies said.

The hunting party had settled in for the night and were awakened around 10 p.m. to a tree crashing down in the middle of their camp.

Bottoms said the tree broke off near the stump as a windstorm blew through the region.

Members of the hunting party dug through the debris and found Pierson, but he had been killed, the sergeant said.

Due to lack of cellphone service in the area, other members of the party had to drive out for phone coverage and reached Crook County 911 around 11:10 p.m.

No one else was injured, the sheriff’s sergeant said.

The sheriff’s office was assisted by Crook County Fire and Rescue medics and the Prineville Funeral Home.