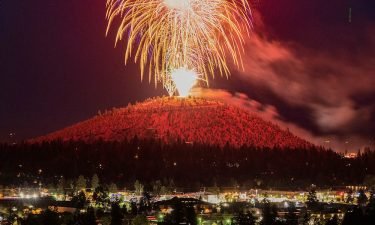 BEND, Ore. (KTVZ) – Bend grew by about 2,500 people in the year ended last July 1 to an estimated population of 102,059 residents, according to new U.S. Census Bureau estimates released Wednesday night.

That Census Bureau estimate also is more than 1,000 people higher than the estimate prepared by the Portland State University Population Research Center, which late last year released its own set of estimates for Oregon city and county populations, using different stats. It pegged Bend’s July 1, 2021 population at 100,922.

So now, both agree, Bend has topped the 100,000-resident milestone.

The Census Bureau also “found” more residents for some other Central Oregon cities than PSU, while the estimates were lower for others.

Madras had an estimated 7,683 residents as of last July 1, according to the Census Bureau, but PSU estimated 7,717 residents. Prineville’s Census Bureau figure of 11,227 was higher than PSU’s estimate of 11,042.

Culver, according to the Census Bureau, had 1,655 residents last July 1, a bit higher than PSU’s figure of 1,636. And while PSU estimated Metolius had 981 residents, the Census Bureau estimate breaks the 1,000-resident milestone, estimating a population of 1,015.

Here's the Census Bureau's release on the new estimates:

Some Cities Experienced Slower Growth Since 2020

MAY 26, 2022 — Populations of cities and towns in the South and West regions of the United States still experienced the most growth from July 2020 to July 2021, with the top 15 fastest-growing cities or towns located in these regions, according to new population estimates for cities and towns, released by the U.S. Census Bureau today.

Eight of the 15 fastest-growing large cities or towns by percent change were in the West — with five in Arizona — and seven in the South. The South and West also contained the top 15 cities with the largest numeric gains — 11 in the South and four in the West.

“While only 4% of all cities and towns had a population of 50,000 or more in 2021, collectively they contained 129.3 million people — nearly 39% of the U.S. population,” said Crystal Delbé, a statistician in the Population Division at the Census Bureau. “On the other hand, of the 19,494 incorporated places in the United States, more than 75% had fewer than 5,000 people.”

Arizona, Texas, Florida and Idaho all had several places among the 15 fastest-growing cities or towns:

The statistics released today cover all local functioning governmental units, including incorporated places (like cities and towns), minor civil divisions (such as townships), and consolidated cities (government units for which the functions of an incorporated place and its parent county have merged).

On June 30, 2022, the Census Bureau will release estimates of the July 1, 2021, population by age, sex, race, and Hispanic origin for the nation, states and counties, and population by age and sex for the Commonwealth of Puerto Rico  and Puerto Rico municipios. The data will be embargoed (June 28, 2022).

With each new release of annual estimates, the entire time series of estimates is revised for all years back to the date of the last census. All previously published estimates (e.g., old vintages) are superseded and archived on the FTP2 site.