SUNRIVER, Ore. (KTVZ) -- A man fired a pistol at his son-in-law in self-defense during a family dispute at a home south of Sunriver Thursday evening, causing no injuries but leading to the arrest of the son-in-law, Deschutes County sheriff's deputies said.

Deputies were dispatched around 7:35 p.m. Thursday to a domestic dispute at a home in the 17000 block of Indio Road in the Spring River area, Sgt. Kent Vander Kamp said.

Deschutes County 911 had received a call from a homeowner, who reported he was assaulted by his son-in-law. He also said he fired a gun during the assault and believed he might have struck his assailant, Vander Kamp said.

Responding deputies determined a domestic dispute erupted between a group of household relatives, which turned physical.

The alleged victim attempted to defend other family members from his son-in-law, identified as Kyle J. Ralston, 28, Vander Kamp said.

The victim and Ralston began to struggle, he said, and Ralston overpowered the victim, who draw a pistol out of self-defense and fired a single round, which missed. He tried to fire again, Vander Kamp said, but the gun malfunctioned.

Ralston fled the scene before law enforcement arrived, but later agreed to meet investigators elsewhere. Ralston was uninjured, while the alleged victim had minor injuries that did not require medical treatment.

"Alcohol appeared to be a factor in this incident," Vander Kam said in a news release.

Ralston was arrested and lodged at the county jail in Bend on charges of fourth-degree assault constituting domestic violence, harassment and coercion.

A jail officer said Ralston was booked into the jail shortly before 11 p.m. Thursday and given conditional release around 3:20 p.m. Friday. 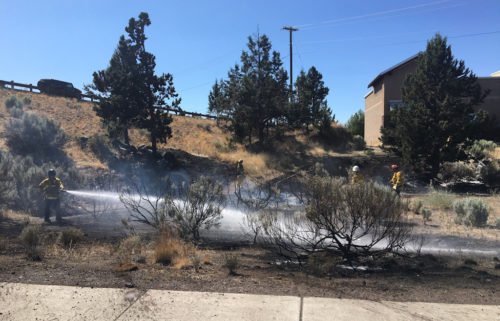