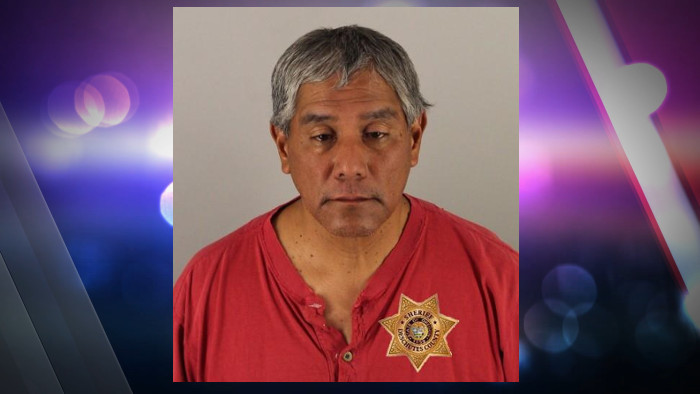 BEND, Ore. (KTVZ) -- A Bend man with several previous DUII convictions was arrested on drunken and reckless driving and other charges early Monday after his pickup slid off icy Knott Road and struck a power pole, shearing it off at its base, Deschutes County sheriff’s deputies said.

Deputies responded just after 2 a.m. to the report of a vehicle crashing into a home’s fence and knocking down power lines in the 21000 block of Knott Road, Sgt. Grant Johnstone said.

Deputies arrived to find that a gray 2004 Ford F-250 pickup driven by Travis Craig Hatfield, 54, was heading west on Knott Road, which was icy at the time, when he lost control of the pickup and it slid off the road, hitting a power pole and fence, Johnstone said.

The impact was severe enough to shear off the pole at the base and send the live electrical wire to the ground in front of the home, the sergeant said.

Hatfield, who was unhurt in the crash, was arrested on charges of felony DUII-alcohol, first-degree criminal mischief and reckless driving. He also had an outstanding warrant for his arrest on a parole violation, and was held without bail on that charge at the county jail.

Johnstone said the driver also was issued traffic citations for driving without insurance and failure to install an ignition interlock device.

Central Electric Cooperative crews were called to the scene and it took about four hours to replace the pole and restore service to the one affected member, according to Brent Ten Pas, CEC’s director of member and public relations.

In April 2017, Hatfield was arrested on felony DUII, reckless driving and driving with a suspended or revoked license, having previously been convicted of DUII in 2012 in Crook County and in 2016 in Deschutes County, court records showed.

Hatfield pleaded guilty to the DUII and reckless driving charges and was sentenced initially to a 90-day jail term, two years probation and a lifetime drivers license suspension, later amended to a revoked probation, 120 days in jail and a a 90-day license suspension.