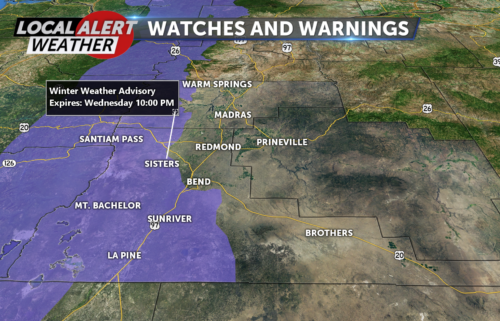 We can expect mixed showers Tuesday night, with lows in the 20s and westerly winds at 5-10…

Rain is likely across the region overnight until 4 a.m. In fact, Sisters, Sunriver and La Pine could see snow added to the mix at some point during that window as well.

Then the showers take a break, leaving us with mostly cloudy skies and temperatures a few degrees above average for most of your Monday.

The showers could return Tuesday in the morning and possibly the evening as well.

Forecast lows will drop across the region starting Tuesday evening, which means La Pine, Sunriver and Sisters could see snow Tuesday night, if the precipitation does in fact return.

That chance for snow stays in those cities through Friday morning.

The rest of us could see snow again later next week as well, but likely just limited to Thursday.

As for your winds, they should be relatively calm the remainder of Sunday before picking up briefly Monday.

Sustained southerly winds on Monday are expected to be between 9-14 mph, with some gusts reaching 20+ mph.

Tuesday, though, will be very breezy. Sustained southwesterly winds should be between 22-29 mph, and some gusts stronger than 40 mph.

Our temperatures will also gradually cool down as we move through the upcoming week, with lows dipping back into the 20s by Thursday and staying there through at least next Saturday.