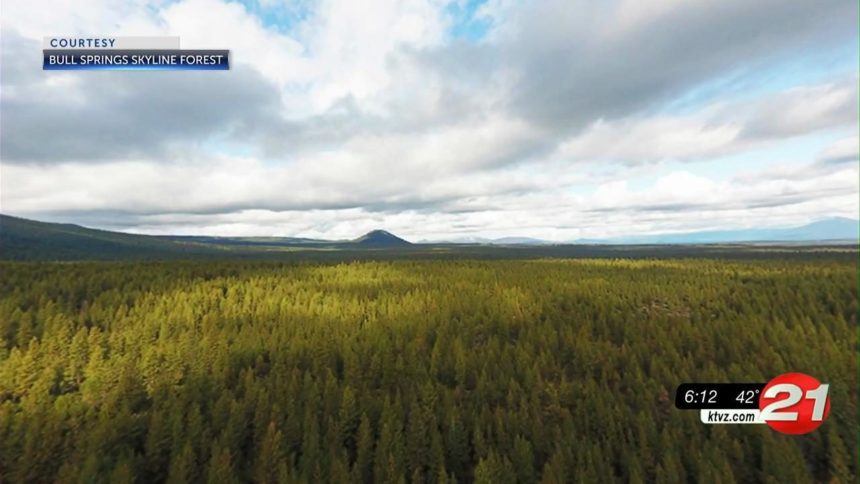 Historic tree farm among largest such contiguous parcels in the West

BEND, Ore. (KTVZ) -- It's not every day that 33,000 acres of timberland just northwest of Bend -- a parcel larger than the city itself, and one of the largest contiguous properties in the West  -- goes up for sale in a public offering. But that just happened with the Bull Springs Skyline Forest, the focus of a public conservation effort in recent years, and the asking price is a hefty $127 million.

"Once you lay eyes on Bull Springs Skyline Forest, you will agree that it is unquestionably one of the most beautiful blocks of contiguous timberland, not only in Oregon, but, in the entire western United States," said Robb Van Pelt, founding partner of Mason & Morse Ranch Company.

The brokers seeking a current sale noted the property has a long history of stewardship dating back to 1916, when Shevlin-Hixon and Brooks-Scanlon opened their logging camps for production. The first Shevlin-Hixon Logging camp was placed at Bull Springs, which was active until 1946. Since that time, they said, the forest has been owned by a variety logging companies and portions exchanged with the U.S. Forest Service.

"In recent years, the property "has become of major interest to the surrounding community of Bend conservation groups, land planners and developers who are interested in working together to balance its valuable attributes that ascend across private ownership, forest management, community recreation, government legislation and the westerly urban expansion of Bend," the release states.

The sale announcement notes the land is currently zoned F1 Forest Use. The Deschutes County F1 Forest Use Zone is intended to conserve forestlands with a minimum 240-acre parcel size.

But the owners state: "Potentially rezoning through Oregon's Destination Resort designation as a cluster development has become a popular balance between sustainable forest management, recreational open space, and urban expansion."

F1 Forest Use Zone-permitted uses include forest operations or forest practices, provisions for wildlife and fishery resources, and other farm uses. Conditional uses permitted include private hunting and fishing, private parks and campgrounds and single-family dwellings.

Bull Springs Skyline Forest combines productive timberlands, conservation and development opportunities together with privacy, the sellers said. The property is one of the largest contiguous parcels in the western United States, with stunning views and abundant wildlife just minutes from Bend, Oregon.

When you combine the resources of timber, wildlife, water, recreation, conservation and redevelopment potential together with its close proximity to Bend, Oregon, you will find it is truly "one of a kind," they said.

"Mason & Morse Ranch Company has been fortunate enough to list and sell some of the finest American farms, ranches and recreational lands across the country," said Bart Miller, managing broker of Mason & Morse Ranch Company. "Bull Springs Skyline Forest is one of America's legacy properties without question. We want to find the right buyer who recognizes the property's attributes and values the history of the property in the community."

The Deschutes Land Trust has worked for years to conserve the property for its key wildlife habitat, recreational opportunities and to protect the scenic green foothills of the Cascades. If protected, the organization said, it would be the Northwest's largest community forest, balancing sustainable forest products production with wildlife, recreation and scenic views.

A decade ago, the land trust and Central Oregon LandWatch developed and won enactment of state legislation to allow whomever owns the forest build nearly 300 homes on 1,200 acres on the north end of the land, in exchange for selling 30,000 acres of it, along with nearly 35,000 acres of the Gilchrist Tree farm, to the land trust at its "timber," rather than "development" value, also donating am 1,800-acre conservation easement as a buffer to the subdivision.

But the five-year timeline in that legislation lapsed before Fidelity sold the land to Whitefish Cascade, which the land trust has said appeared focused on managing the forest for timber production.