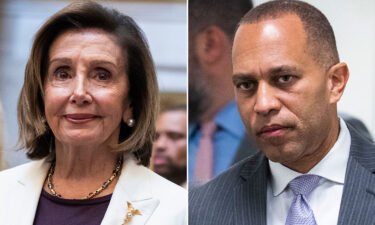 Parts of Southern California were under flash flood warnings Friday as a tropical storm threatens to drop a year’s worth of rain in areas of the drought-stricken state, according to forecasters.

The warning was in effect for Riverside County and northeastern San Diego County, according to the National Weather Service. The warning includes Indio, southeastern Palm Springs and Coachella.

“Life threatening flash flooding of creeks and streams, urban areas, highways, streets and underpasses,” is possible according to the warning.

The extreme weather comes as Tropical Storm Kay trudges northward after making landfall Thursday in Mexico as a Category 1 hurricane. While Kay has weakened to a tropical storm, it is still packing sustained winds of 40 mph. And it is enhancing winds through mountain terrain — similar to a Santa Ana wind event — to much stronger gusts, including a 109-mph blast Friday at Cuyamaca Peak in the San Diego Mountains, the weather service reported.

As Kay’s rotating winds push warm, dry air from the east, much of Southern and Central California — already baking through a climate crisis-fueled heat wave — will stay under excessive heat warnings through 8 p.m. Friday. And concern is growing the erratic, strong winds will spread already-burning wildfires, including the Fairview Fire, which has killed two people and exploded in size this week, forcing evacuations as it’s burned more than 27,400 acres.

“With the really strong winds, we could continue to see the fires that are already burning continue to burn and spread before the rain actually gets here,” the National Weather Service in San Diego told CNN.

The weather service said in a 1:40 p.m. PT update heavy rain continued in the San Diego deserts and rain bands were pushing into Orange and Riverside counties.

While the rain could quell the crushing heat — bringing relief to weary residents and power grid operators who’d prepped for rolling outages — it also could trigger debris flows, especially in places just ravaged by fire.

A flash flood warning was also in effect for southwestern Imperial County, where up to 1.5 inches of rain had fallen.

And though the Western US has been plagued for months by drought, getting up to 4 inches of rain in just two days won’t deliver the sort of recovery that’s needed. Indeed, the Imperial Valley region, home to one of the nation’s most productive farm belts and suffering severe drought since early spring, is now bracing for serious damage.

“Imperial Valley farmers are in the middle of preparing their lands for the planting season, so a half an inch to 1 inch of rain will cause damage and delays to their schedule,” said Robert Schettler, a spokesperson for the Imperial Irrigation District.

While the damage Kay will leave behind is uncertain, the storm is expected to leave in its trail more moderate temperatures as it turns away from the US West Coast and pushes out into the Pacific on Saturday.

With triple-digit temperatures continuing Friday for much of California, record highs are expected to be set before Kay’s cool-down takes hold.

In Palm Springs, which typically sees 4.61 inches of rain annually, 2 to 4 inches are forecast. Three inches at Palm Springs would put this month in the top three wettest Septembers for the city, where the average September rainfall is 0.24 inches.

And Yuma could see 1.5 inches — which would make 2022 the wettest September since 2009. The city’s average September rainfall is 0.68 inches.

Though rain no doubt would aid firefighters working to extinguish wildfires, much damage already has been done: California Gov. Gavin Newsom on Thursday declared a state of emergency for three counties over two blazes.

Beyond the Fairview Fire, the Mosquito Fire in Northern California’s El Dorado and Placer counties has charred 29,585 acres and is 0% contained, according to InciWeb, a national wildfire clearinghouse. The fire threatens more than 3,600 structures, according to a Friday update on the website.

Evacuation orders were issued for parts of Placer County, and some residents of El Dorado County have been ordered to evacuate, officials said.

“Both fires are threatening multiple communities and critical infrastructure, forcing the evacuation of tens of thousands of residents,” the governor’s office said in a statement.

Oregon, meanwhile, faces strong winds from the east that will increase fire danger across the state due to a weather system separate from Kay.

“A red flag warning … will be in effect this FRIDAY & SATURDAY, due to the expected strong east winds and low humidity. These conditions can cause rapid spread of fire,” the National Weather Service in Portland tweeted.

Wind gusts in the region are expected to range from 25 to 50 mph, according to a tweet from the weather service in Portland.

Utility companies Pacific Power and Portland General Electric announced they may proactively turn off power in some high-risk areas to reduce the risk of fire.

The outages would be implemented “in a limited, high-risk area to help reduce the risk of wildfire and to help protect people, property and the environment,” Portland General Electric said in a release. The move could impact about 30,000 customer meters in the Portland and Salem, Oregon, area, the utility said.

About 12,000 Pacific Power customers in Linn, Douglas, Lincoln, Tillamook, Marion and Polk counties have been notified of the potential shut-offs, the provider said in a statement.