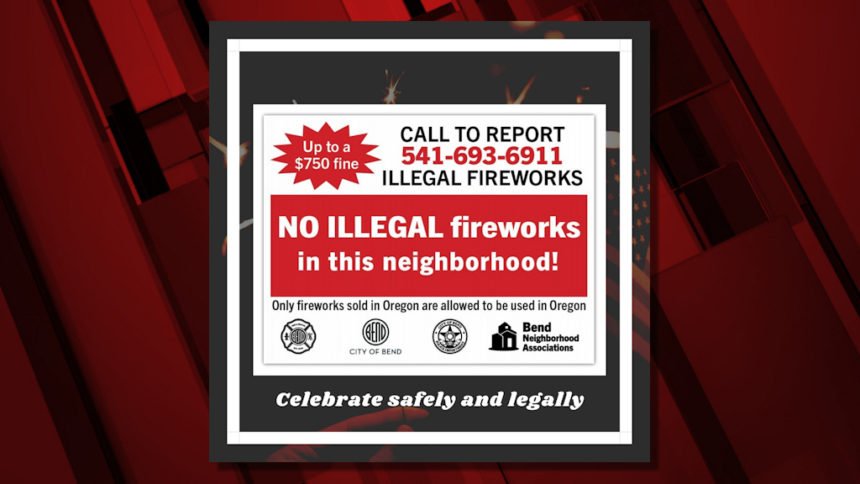 BEND, Ore. (KTVZ)-- With many illegal fireworks taking flight or sending loud booms across Central Oregon neighborhoods over the past weekend, some enjoyed the show they have to offer -- but others, not so much.

Hundreds of complaints were received by the Bend Police Department and Deschutes County Sheriff's Office regarding illegal fireworks.

Bend police Lt. Juli McConkey said the agency received 156 calls for fireworks complaints from Friday to Sunday, all but 50 on the holiday itself.

Last year, during the week of June 26 through July 5, Bend police issued two citations for illegal fireworks. This year, over the same time, they issued four citations, carrying a potential fine of $750.

McConkey said even though they prioritize calls for service and have difficulty tracking down the exact source of fireworks-related calls, they do take the issue seriously.

"We would obviously continue to suggest and encourage people to only use legal fireworks they can get in Oregon," McConkey said. "Don't be going out of state and bringing those fireworks here. They're not legal, and we will respond when our calls for service come in. We'll respond and issue citations, if we can prove it's the person that's lighting them."

Over the weekend, one fire in Bend was confirmed to be from improper disposal of fireworks, as they had been placed in a garbage can against a residence, Bend Fire Battalion Chief Trish Connolly said Monday.

Two other fires may have been caused by fireworks, though it could not be confirmed. One burned a vehicle in Romaine Village early Monday morning, she said.

Sheriff's Lt. William Bailey said they received 61 complaints from Friday through Sunday, and all but 12 were on the Fourth.

The Redmond Police Department investigated 101 complaints over the weekend, but issued no citations.

With Central Oregon facing a drought, mixed with dangerous fire conditions, officials say it’s important to keep in mind the dangers of fireworks and other fire-related activities.