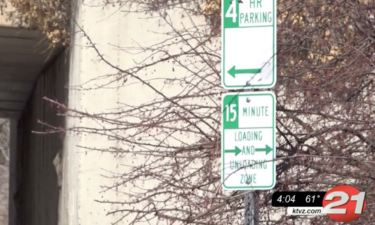 BEND, Ore. (KTVZ) -- At the Black Bear Diner in Bend, a sign along Third Street, one of the city's busiest streets, reads: "Open for Dine In."

The Cork Cellars Bistro in Sisters promotes on its website that it's open for indoor dining.

And several restaurants in Redmond are also allowing customers to eat inside.

Amid a growing number of businesses defying Gov. Kate Brown's executive orders to curb the spread of COVID-19, state agencies are investigating and say violators could face potentially hefty fines, a "red warning" notice to cease, or bigger consequences in court.

Norman Williams, a professor of constitutional law at Willamette University, said the penalties are largely enforceable.

An Oregon OSHA representative responded to NewsChannel 21 about its authority, saying in an email: "We can't padlock the doors, but continued non-compliance can get expensive, with substantially higher fines."

"Employers can use the appeal process, but we believe the citations we've issued are valid and that we will prevail," the statement continued.

According to Williams, refusing to pay the fines might not be the best idea.

"I think that's a dangerous strategy for a business owner to take, because the state can start seizing assets to collect fines, and the only recourse for the business owner at that point is to declare bankruptcy, " he said, adding that "bankruptcy of some fines are not dischargeable."

He also said it could get worse for restaurants.

"At least as a initial measure, the enforcement sanctions begin with fines," Williams said. But at a certain point, it would be well within the state's authority to order the closure of the restaurant. It would just have to go to court."

Willamette law professor Paul Diller weighed in on the issue as well.

"it's certainly an uphill battle, but I wouldn't say it's absolutely impossible to win by asserting a certain defense against enforcement," he said.

Diller touched on a few possibilities.

"I think it's always possible a restaurant owner could succeed if they can go show arbitrariness in enforcement, perhaps, or if they could show they are being targeted in some way, if it violates some constitutional norm."