Police responded around 8:25 p.m to a reported hit-and-run crash in the area of Northwest Olney Avenue and Wall Street, Sgt. R.C. Bigelow said.

Minutes later, a citizen called Deschutes County 911 dispatchers to report a car matching that description was crashed facing the wrong way (northbound) on the southbound off-ramp to the parkway at Revere Avenue, the sergeant said. The caller told dispatchers a woman had left the crashed car and provided a description.

An assisting Oregon State Police trooper spotted and stopped the suspect, identified as Katie Elizabeth Hall, 26. Bend police then arrested her on suspicion of DUII-alcohol and hit-and-run.

Officers soon learned Hall had an infant at home, Bigelow said. They conducted a welfare check and found the 2-month-old boy alone on the hardwood floor, under the bed. Bigelow said officers believed the child may have fallen from the bed, where he was unattended, and rolled underneath it.

Bend Fire paramedics responded and checked the child, finding he not require immediate medical attention. Those involved in the crashes, including Hall and two juvenile passengers in one vehicle, also had only at most minor injuries and didn't need transport to the hospital.

Online court records show Hall already was scheduled to appear in court Tuesday to enter a plea following a Sept. 8 arrest on a charge of hit and run-property damage. She pleaded guilty to DUII and reckless driving in 2014 and was sentenced to 24 days in jail and an alcohol treatment program, but a 2016 court notice indicated she failed to comply and remain in treatment. 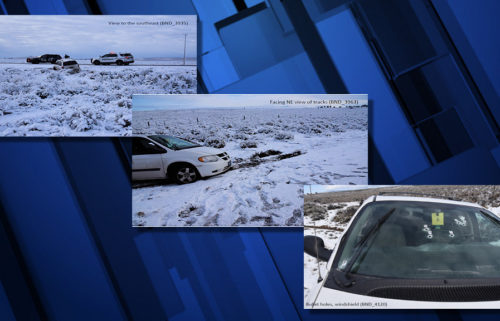