BEND, Ore. (KTVZ) – Two La Pine men were cited Saturday evening on disorderly conduct and other charges after a Bend man taking part in a downtown demonstration exchanged words with a pickup truck passenger, pursued the pickup by bicycle and was struck by the passenger’s opening door, then had a handgun pointed at him by the driver, police said.

Police responded shortly before 7 p.m. to a reported weapons offense in the area of Northwest Wall Street and Franklin Avenue, Sgt. Cindy Ksenzulak said in a news release Monday.

A caller told dispatch it appeared to be some type of “road rage” incident involving a pickup truck and a bicyclist. The caller also said an occupant of the truck displayed a handgun before they left. The truck’s description and license plate were provided to dispatchers, Ksenzulak said.

Officers contacted the 29-year-old alleged victim, Andrew Heller of Bend, who had visible physical injuries (cuts and bruises) and remained at the scene. Heller declined care by medics at the scene and said he would seek his own care later, Ksenzulak said.

Officers talked to numerous witnesses, who provided their recollection of what occurred.

The incident began when the pickup’s passenger, identified as Darrell Goddard, 37, of La Pine, yelled a derogatory statement to Heller as he took part in a demonstration at the corner of Wall Street and Greenwood Avenue, Ksenzulak said.

Heller than rode his bike to follow the truck, catching up to the pickup and its two occupants at Wall Street and Franklin Avenue.

The protester “had an exchange of words with Goddard, who in return, opened his passenger door into Heller, causing him to fall off his bicycle and into another vehicle, causing minor damage to that vehicle,” Ksenzulak wrote.

After Heller landed on the ground, Goddard “continued to assault” the protester while the pickup’s driver, Robert Thompson, 50, got out of the truck, approached the cyclist and pointed a handgun at him, Ksenzulak said. Heller remained still, she said, and both men got back into the truck and left.

While officers were on the scene with the alleged victim, more officers found the fleeing truck just over a mile away, the sergeant said. The two occupants were detained without incident. Ksenzulak said officers determined both men were involved and seized two loaded handguns from the truck. 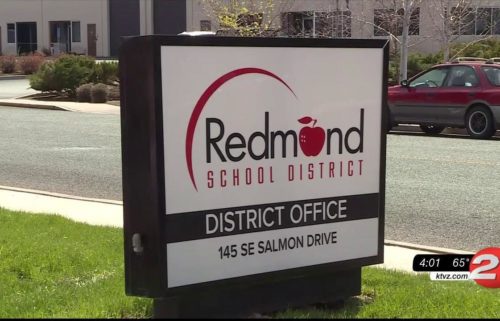