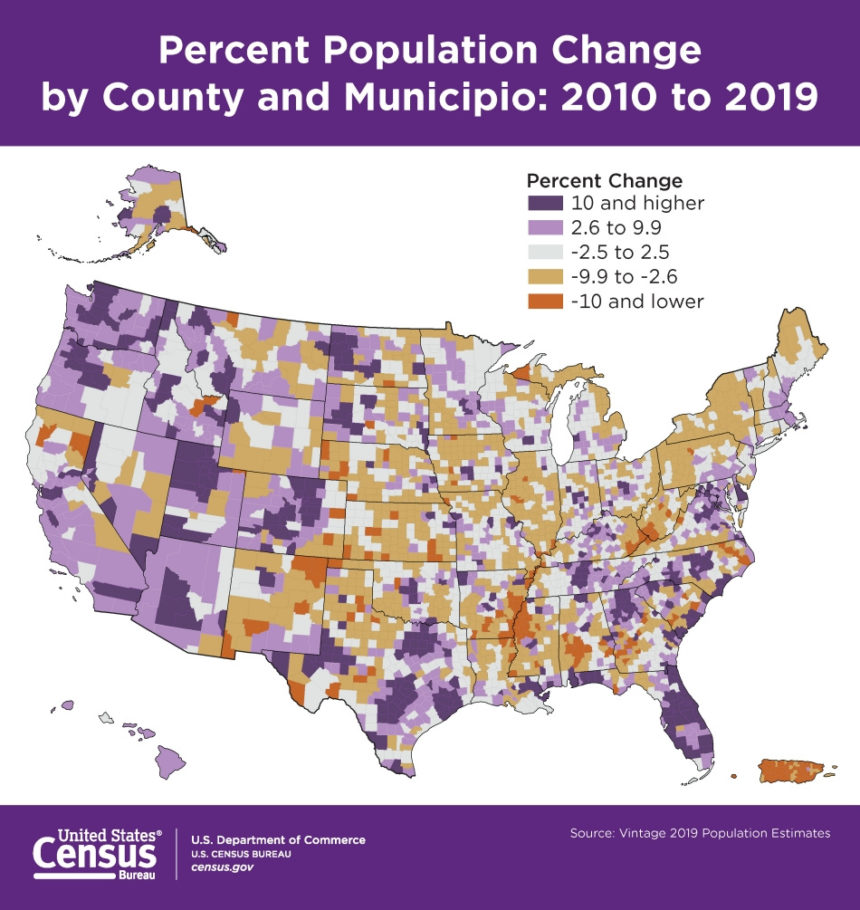 Looking back now at July 1, 2019 population estimates -- the last ones before this year's physical count in the April 1 census -- might seem practically ancient, considering the economic tumult of the past few weeks and its impact on all aspects of life, including who can or will move where, how big a family people will want to have, etc.

Still, the estimates show Deschutes County grew by 39,964 residents in the 2010s, to a total of 197,692 people. That's a growth rate of 25.3%, the Census Bureau said, also ranking Deschutes fourth among Oregon's 36 counties in the actual number of new arrivals over the decade (figures that also factor in births and deaths).

By comparison, Deschutes also was the fastest growing county in the state from 1990-2000 -- but that was a whopping 54%, more than double the rate of this past decade. It also led the state in population growth for the 2000s, up 30% between 2000 and 2006, before slowing (as did most everyone else) when the Great Recession hit.

Neighboring Crook County was the state's second-fastest growing county of this past decade, adding 3,426 residents for a total of 24,404 people, the Census Bureau said. That's a rise of 16.3 percent from 2010.

The new Census Bureau estimates also show that Deschutes County grew by 5,787 people, or 3%, in the year ended last July 1, ranking it 52nd among the nation's 100 fastest-growing counties (with at least 10,000 residents).

Crook County also just made that national list, at No. 97, with 579 more residents in the one-year period, growing by 2.4% for a total population of 24,404. Deschutes and Crook are the only two Oregon counties on that list.

For the 2010-19 decade, Deschutes County was the only Oregon county to make the 100 fastest-growing counties list, coming in at No. 43. (Another North Dakota county, Williams, topped that list, growing by nearly 68%, to 22,399 residents as of last July.)

For the year ended last July 1, Deschutes County remained the seventh-largest county in the state, but its 5,787 added residents over the year topped the estimated numerical growth of every other county -- even Multnomah, which added just 3,783 residents, and Washington, which grew by 4,688.

Crook County's 579-resident growth of 2.4% to 24,404 residents was the state's third-fastest growth rate for the year.

Nationally, the Census Bureau said six of the 10 counties with the biggest population growth in the decade were in Texas. And the top 10 with the largest numeric gain were all in the South and the West.