A 43-year prison sentence given to a woman by a Thai court for insulting the monarchy could be seen as a “warning shot” to protesters demanding reform in the kingdom, according to analysts.

The sentence passed Tuesday is believed to be the toughest ever imposed under the country’s lese majeste laws and comes after months of youth-led protests last year openly calling for reform of Thailand’s powerful monarchy and greater democratic freedoms. The verdict is likely to send a chill through the movement, which has seen dozens of its protest leaders and activists charged with the same crime.

Thailand has some of the world’s strictest laws against defaming or criticizing the king, queen, heir-apparent or regent. The laws, which are known as lese majeste, can result in a 15-year prison sentence for each violation.

Anchan Preelert, 65, pleaded guilty to sharing audio clips on YouTube and Facebook between 2014 and 2015 that were deemed critical of the kingdom’s royal family, according to the Thai Lawyers for Human Rights. She was convicted of 29 counts, with three years for each.

The criminal court in Bangkok handed an initial sentence of 87 years but halved it because of Anchan’s guilty plea.

“The sentence is the highest ever handed down by Thai court from violating Section 112,” said her lawyer Pawinee Chumsri, referring to the lese majeste law.

Pawinee said they would appeal the verdict and were working to secure bail from the Court of Appeal. “There are two more courts we can try on her legal case,” she said.

Since late last year, authorities have brought lese majeste cases against dozens of protesters after more than two years of the law not being used. Thailand’s Prime Minister Prayut Chan-o-cha said last June that the law was no longer being applied because of a request from King Maha Vajiralongkorn.

But that was before the democracy movement grew to become the biggest challenge to the establishment the country has seen in the modern era. For more than five months, protesters held regular demonstrations demanding the resignation of Prayut — who seized power in a military coup in 2014 — as well as the dissolution of Parliament and changes to the constitution that they say entrenches the military’s power.

Many protesters felt emboldened to openly call for reform of the monarchy.

Those calls hit a nerve and brought thousands of people out onto the streets, in sometimes violent confrontations with police and pro-monarchy groups. The idea of a sacrosanct monarchy and a King shielded from public scrutiny was torn apart by the younger generation. Their demands included the King be held to account under the constitution, a curb on his powers, and transparency over his finances.

From November 24 to December 31, 2020, at least 38 people were charged under lese majeste, including a minor and several university students, according to the Thai Lawyers for Human Rights.

Thitinan Pongsudhirak, political scientist and director of the Institute of Security and International Studies at Chulalongkorn University, said Anchan’s sentence “means the lese majeste law is back in full force.”

“Because it dates from the last reign and the coup in 2014, this record-setting sentence after a hiatus is seen as a warning shot to the ongoing youth-led protest movement against the new monarch,” he said. “It suggests that Thailand’s established centers of power are hunkering down for the long haul.”

Anchan’s case is not directly linked to the recent charges against pro-democracy protesters. But with the almost three-year hiatus of lese majeste cases over, analysts say the sentence suggests old cases will now be activated.

Anchan, a former civil servant who worked for the Revenue Department, was arrested in January 2015, not long after the military overthrew Thailand’s civilian government in a coup.

After seizing power, Prayut imposed martial law and hundreds of activists were arrested and charged under draconian laws such as sedition and lese majeste in a crackdown aimed to silence any dissent, rights groups said.

Anchan’s case was initially brought before a military court and she was detained for almost four years while awaiting trial, her lawyers said. In 2018, she was released on bail and her case was transferred to a civilian criminal court.

Her crime was to share audio clips on social media from an underground radio show that allegedly criticized the late King Bhumibol Adulyadej. The creator of the clips — a man who went by the name “Banpodj” — was convicted on lese majeste and has already served his sentence.

“This shocking case is yet another serious assault on Thailand’s vanishing space for freedom of expression,” Amnesty International’s Asia-Pacific regional director Yamini Mishra said. “The manner of her sentencing is also chilling. The way authorities have evidently sought to maximize the punishments by multiplying criminal charges sends a clear message of deterrence to Thailand’s 50 million internet users.” 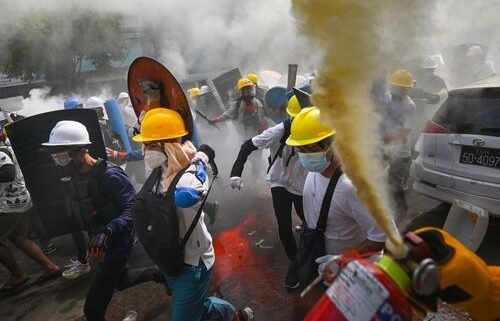