Welcome to Wonder Theory, your weekly space and science digest.

Each day, we’re weaving the story that will remain once we’re gone. These imprints left behind, however small, are what we use to learn about our ancient ancestors.

All of the insights collected from the past illustrate the evolution of humanity over thousands of years, something we can’t help but be curious about because it’s human nature to wonder.

Bones and artifacts like stone tools aren’t always there to contribute to this narrative. Now, however, dirt can help tell the tale, too.

To borrow a lyric from the band Kansas, it’s true that “all we are is dust in the wind.” But at least that dust is telling our story.

That’s right: The story of Neanderthals and extinct humans is coming from the very dirt in the caves where they lived.

Scientists are extracting human DNA from cave sediments in Europe and Siberia and even learning about enigmatic Denisovans, an early human population with only a few bone fragments as evidence of their existence.

These new insights provide a more complete picture of ancient humans and how they interacted.

Meanwhile, in an eastern Kenyan cave, scientists found a toddler laid to rest about 78,000 years ago, with the child’s head on a pillow.

Nicknamed “Mtoto,” meaning “child” in Swahili, the toddler was between 2½ and 3 years old at death. Mtoto was placed sideways, with legs folded and drawn toward the chest.

While older burials by Neanderthals and early Homo sapiens have been found in Europe and the Middle East dating back 120,000 years, the child’s skeleton represents the earliest evidence of intentional human burial ever found in Africa.

Say hello to a “gorgeous” spider that truly is not out to get you.

The rare breed, which is related to tarantulas, lives in the Florida Everglades and has been seen only a few times since the 1920s.

In other words, you aren’t likely to stumble across one of these guys during a visit to the Sunshine State.

While researchers are learning more about these spiders and their underground living conditions, one mystery abounds: Where are all of the females? Scientists have yet to encounter one.

Some stars live fast and look beautiful doing it before they die young in a brilliant explosion.

AG Carinae, a blue giant star located 20,000 light-years from Earth in the Milky Way galaxy, is one of those luminaries.

The Hubble Space Telescope captured an image of one of the star’s outbursts to celebrate the observatory’s 31st anniversary since launching into space on April 24, 1990.

This bright star’s explosive, infamous temper tantrums are part of what make it so scintillating. But this life comes at a cost, and AG Carinae is destined for a stellar life-and-death struggle.

New groundbreaking research about the inner ears of dinosaurs offers insights into how these beasts may have experienced their world, including whether they were nocturnal hunters, clumsy flyers or land lubbers.

For example, a tiny desert-dwelling dinosaur, named Shuvuuia deserti, had unusually large eyes and hair-trigger hearing — meaning it likely hunted prey at night. But can you guess when Velociraptor, the predatory meat-eater made famous by the “Jurassic Park” movies, went in search of its next meal?

The researchers found clusters of different species with similar inner ear traits. These corresponded with different ways animals moved through and perceived their environments.

One of the most intriguing findings: The traits associated with attentive dinosaur parents.

They believe the Antarctic ice sheet is what stands between coastlines that resemble what we see today, and — if it collapses — a world map unrecognizable from the one we’ve known.

Two new studies published Wednesday agree on a lot — that ice melt globally from human-caused warming is a threat to coastlines around the world, and that planning needs to begin now for a future with higher sea levels.

But the reports come to different conclusions about how Antarctica’s ice sheet might fare in a warming world.

After four successful flights, what’s a little Mars helicopter to do? Ace another challenging flight, reach a new height record and take an aerial excursion to a new airfield, of course.

The Ingenuity helicopter completed its fifth flight Friday and left behind Wright Brothers Field, the site of its previous historic adventures.

Now, the 4-pound chopper has a new home 423 feet south and is entering a secondary phase, with more flights planned over the next 31 days.

Oh, and the Perseverance rover was able to snap a photo and capture what it sounds like when the copter flies on Mars.

Way to go, Ginny and Percy. We can’t wait for the next part of your journey together.

Like what you’ve read? Oh, but there’s more. Sign up here to receive in your inbox the next edition of Wonder Theory, brought to you by CNN Space and Science writer Ashley Strickland, who finds wonder in planets beyond our solar system and discoveries from the ancient world. 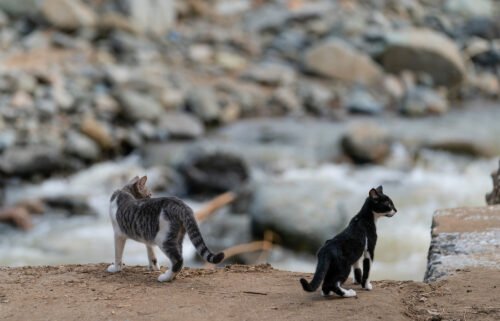