SALEM, Ore. (AP) — A state senator told demonstrators opposed to a plan to build a natural gas pipeline and marine export terminal in Oregon that he expects the battle to go to the courts if the Trump administration tries to ram the project through despite a lack of state permits.

Demonstrators gathered outside the Department of State Lands on Tuesday to thank its director, Vicki Walker, for refusing to grant another extension to Pembina, an energy company based in Calgary, Canada, for a decision on a removal-fill permit. The permit is required to dredge sediment out of Coos Bay, on Oregon’s southern coast, for the marine export terminal, and to construct a 230-mile feeder pipeline through and under waterways in southern Oregon.

Pembina reacted by withdrawing its application for the state permit. Another state agency, the Oregon Department of Environmental Quality, has already denied a water quality certification for the proposed Jordan Cove natural gas export project.

Jordan Cove said it is awaiting a final determination by the Federal Energy Regulatory Commission on Feb. 13 before deciding how the company will proceed. The Trump administration in August proposed streamlining approval of gas pipelines and other energy projects by limiting states’ certification authorities under the U.S. Clean Water Act.

State Sen. Jeff Golden, a Democrat and former river guide in southern Oregon’s Rogue Valley, told the several dozen red-shirted demonstrators that he sees a court battle on the horizon.

“I think the evidence is very clear that the strategy now for this project is to wholly ignore Oregon and its requirements and to have the Federal Energy Regulatory Commission approve it, and somehow have the courts rule that that Oregon law, that quite clearly can’t be preempted by the federal government, can be,” Golden said.

He spoke of a “legal fight that almost certainly is coming, to uphold the law of the land and tell the Trump administration you don’t get to cancel environmental safeguards all over this country on behalf of the fossil fuel industry.”

Supporters of the project, which would permit shipment of natural gas from the United States and Canada to Asia, said it would create local jobs. Opponents say it would ruin habitat and that the increased use of a fossil fuel would contribute to global warming. 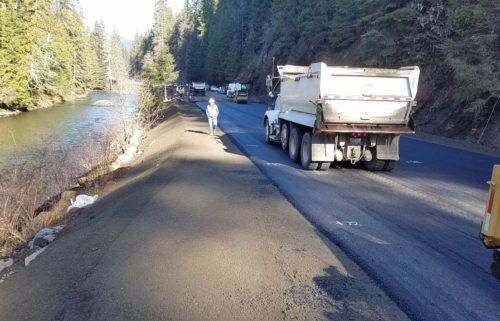