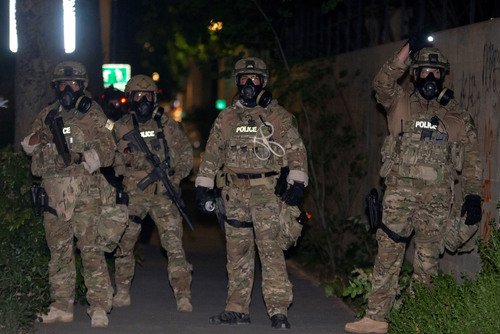 PORTLAND, Ore. (AP) -- The cities of Oakland and Portland have sued the U.S. Department of Homeland Security and the Justice Department, alleging that the agencies are overstepping constitutional limits in their use of federal law enforcement officers to tamp down on protests.

The lawsuit, filed late Wednesday in U.S. District Court in San Francisco, cites the deployment of U.S. agents this summer to quell protests and also accuses the U.S. Marshals Service of acting unlawfully by deputizing dozens of local Portland police officers as federal agents, despite objections from city officials.

The use of federal agents in these ways is a major shift in policy and threatens the independence of local law enforcement, according to the lawsuit. The complaint cites the anti-commandeering doctrine of the Tenth Amendment, which says that the federal government cannot require states or state officials to adopt or enforce federal law.

The Justice Department and the Department of Homeland Security did not immediately respond to requests for comment Thursday. In the past, acting DHS secretary Chad Wolf has been a vocal defender of the administration’s response to the civil unrest in Portland.