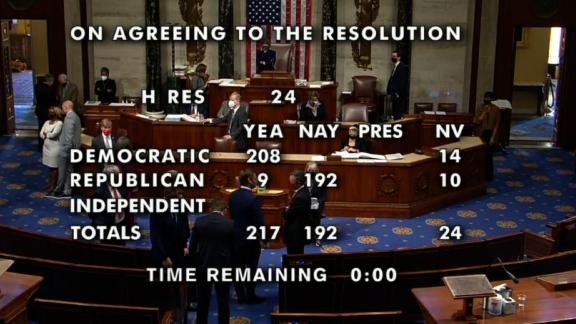 In a statement, Bentz cited the importance of unifying the nation around a peaceful transition to the Biden Administration:

“I continue to share the emotions many are feeling in the aftermath of the unprecedented and unacceptable violence this past week.  But the current rush-to-judgement impeachment proceedings have only succeeded in dividing our country even more.

"I voted against impeachment because our focus should be on unifying our nation, ensuring a peaceful transition to the Biden Administration, and working to address the pressing issues facing our country and Oregon's Second Congressional District.

"I came to Congress to stand up for rural communities across my district by addressing the terrible damage caused by recent wildfires, reforming the laws that govern our water rights, and ensuring we help those hardest hit by the COVID-19 pandemic,” Bentz concluded.

WASHINGTON, D.C. – Oregon’s U.S. Senator Jeff Merkley released the following statement after the U.S. House of Representatives voted to impeach President Trump for inciting a violent mob attack on the U.S. Capitol, which put hundreds of lives at risk and resulted in five deaths and dozens of injuries:

“Donald Trump is completely unfit to be president.  He has waged an unceasing insurrection against our laws and Constitution since he lost the election, capped off by inciting a domestic terror attack on our nation’s Capitol.  Every day that he remains in the Oval Office and his dangerous attacks on our democracy go unanswered is a serious threat to the safety of the American people and the institutions of our democratic republic. I applaud the U.S. House of Representatives for taking swift and decisive action today to hold this president accountable for his dangerous and unrepentant behavior.

“It is now the responsibility of the U.S. Senate to convene, to immediately hold an impeachment trial. We face arguably the most serious threat to the integrity of our national government since the Civil War.  This is no time for partisan calculations and personal ambition to drive decisions. Everyone who believes in our Constitution and the rule of law should come together to defend America.  Our nation desperately needs full accountability in order to seek justice and heal from last week’s disturbing violence.”

Senator Ron Wyden tweeted his thoughts after the House vote: