BEND, Ore. (KTVZ) -- More snow of varying amounts at varied elevations fell across much of Central Oregon on Sunday, as travelers over Santiam Pass encountered a downed tree and motorists came together to get it out of the way. Forecasters said more snow is due through the coming work week.

While lower elevations of the High Desert saw only snow showers and were under no weather warnings Sunday, the National Weather Service continued its winter weather advisory for the northern Oregon Cascades through 6 p.m. Monday, with another 8-16 inches of snow possible, and a winter storm warning for the east slopes of the Cascades until 10 a.m. Monday, with 3-7 more inches possible.

Forecasters said the next pulse of moisture arriving Monday afternoon and night will produce snowfall at all elevations, "with the first significant snowfall for some of the lower elevations."

A Sunriver weather spotter reported 10 inches of snow in the 24 hours ending early Sunday afternoon, while a spotter five miles north of La Pine reported five inches, another in the area got eight inches and a spotter two miles northwest of Bend reported four inches.

NWS forecasters also said Bend still could see another 6-12 more inches of snow by Wednesday. A chance of snow is in the forecast for much of the coming week, except for breaks on Friday and next Sunday.

There were serious weather issues elsewhere in the state over the weekend, including a tragedy on the coast near Cannon Beach, where a Portland father and two young children were swept into the ocean by a large wave on Saturday; he and his daughter were rescued, but the 7-year-old girl died and searchers could not find his 4-year-old son.

A fallen tree brought down a large sign bridge near Mount Hood before dawn Sunday, closing Highway 26 for a time, while in southern Oregon, fallen or leaning trees also prompted closure Sunday of a 28-mile stretch of Oregon Highway 230, the West Diamond Lake Highway.

The risks and dangers were widespread, especially for mountain travelers. West of Santiam Pass, motorist and nurse practitioner Laurie Rice of Bend said she was traveling to Salem Sunday afternoon when a large fir tree fell across Highway 20, blocking traffic in both directions.

But she said motorists got busy and cleared a path well before any ODOT crew was on scene.

The drivers of a Dodge equpped with a winch, and a double-semi that stabilized it, moved the tree over, so one lane could open up, Rice told NewsChannel 21. Someone with an ax chopped the end out of the snow to help in the tree removal -- "amazing teamwork in the cold winter snow," Rice wrote.

The heavy mountain snow was welcome news for skiers and snowboarders (and the businesses that depend on them) after a lean start to the season. Mt. Bachelor, meanwhile, got 36 inches of snow in 48 hours, pushing the base to 75 inches, while Hoodoo near Santiam Pass saw its base build to about 58 inches.

The snowfall also is helping to ease a serious deficit in early-season Cascades snowpack. The Natural Resource Conservation Service reported as of Monday the Upper Deschutes/Crooked River Basin was at 73% of average snow-water equivalent for this point in the season, compared to just 38% of normal less than two weeks ago.

The first major winter storm of the season also reached the Seattle area over the weekend, and the NWS issued a winter weather advisory for both the Seattle and Portland areas, in effect through the Monday morning commute.

Snow began falling Sunday afternoon in Seattle, which could get up to two inches of snow and very slick road conditions. Other parts of Oregon also face severe weather, including "sneaker waves" on the coast and avalanche warnings on Mount Hood. 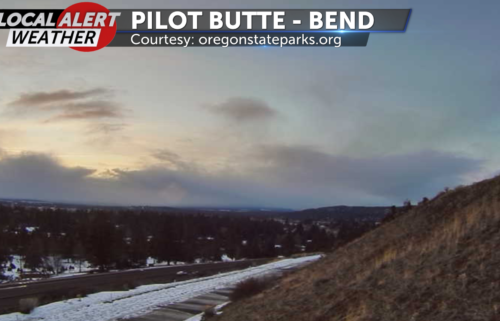