BEND, Ore. (KTVZ) — Considered one of the seven natural wonders of the world, the Grand Canyon is one of the most widely recognized and beloved landscapes. It is also surrounded by threats that include uranium mining activity, helicopter traffic and real-estate development.

To explore this paradox, author Kevin Fedarko teamed up with friend, National Geographic photographer and filmmaker Pete McBride, and together the two men journeyed on foot through the heart of the most iconic national park in America. It became an odyssey of almost 800 miles, nearly none of which involved a trail.

Fedarko, an acclaimed writer who told the tale in The New York Timesbestseller The Emerald Mile: The Epic Story of the Fastest Ride in History Through the Heart of the Grand Canyon, will share insights about the Grand Canyon in his presentation titled “Beneath the River of Shooting Stars: Beauty, Hardship, and Grace in the Grand Canyon” at the High Desert Museum on Thursday, September 22 as the keynote speaker for the 2022 Waterston Desert Writing Prize.

The Waterston Desert Writing Prize honors literary nonfiction that illustrates artistic excellence, sensitivity to place and desert literacy with the desert as both subject and setting. The evening also includes a reception and the awarding of the 2022 Waterston Desert Writing Prize by this year’s guest judge, Raquel Gutiérrez (raquelgutierrez.net). Gutiérrez is an MFA faculty author at OSU-Cascades. A 2021 recipient of the Rabkin Prize in Arts Journalism, their writing has appeared in Art in America, The Georgia Review and on NPR Music. Gutiérrez recently published a memoir, Brown Neon.

Caroline Tracey (cetracey.com), winner of the 2022 Waterston Desert Writing Prize, will read at the event as well. Her submission, “SALT LAKES,” is a collection of 18 essays providing a queer perspective on climate change in arid environments. Salt lakes make up approximately one third of inland waters globally and provide crucial wildlife habitat. These important bodies of water are shrinking and becoming more saline due to increased evaporation from a warming climate, secondary salinization from irrigation of desert soils and other factors.

Tracey is based in Tucson, Arizona and focuses her work on culture, environment and migration in the southwestern United States, Mexico and the borderlands between the two. Her personal essays have appeared in Kenyon Review, Full Stop, New South and elsewhere. She holds a Ph.D. in geography from the University of California, Berkeley and lives with her wife, Mexican architect and sculptor Mariana GJP, and their dog, between Tucson and Mexico City. Tracey speaks and writes in English, Spanish and Russian.

“We are honored to have an amazing lineup for this year’s Waterston Desert Writing Prize,” said Museum Executive Director Dana Whitelaw, Ph.D. “Kevin Fedarko’s extensive research on and time spent in the Grand Canyon make for deep storytelling about this iconic desert place — all of which fits into the Prize’s aim to elevate desert landscapes through literary nonfiction. And Caroline Tracey’s experiences with salt lake ecosystems will undoubtedly inspire and spark discussion. We’re so pleased to welcome them both.”

Kevin Fedarko has spent the past 20 years writing about conservation, exploration and the Grand Canyon. His writing has appeared in National Geographic, The New York Times and Esquire, among other publications, and a trio of his adventure stories from the Himalayas, the Horn of Africa and the Colorado River are anthologized in The Best American Travel Writing. He was a staff writer at Time from 1991 to 1997, where his work earned him an Overseas Press Club Award for his story on the assassination of Yitzhak Rabin. Fedarko earned a Master’s of philosophy in Russian history at Oxford in 1990 and currently lives in Flagstaff, Arizona.

Fedarko’s presentation will include insights from his upcoming second book about the Grand Canyon as well as imagery and video from McBride.

“Kevin Fedarko’s addition to the Waterston program will make for a very exciting event at the High Desert Museum,” said Prize founder Ellen Waterston. “He offers a unique literary perspective on desert landscapes—deepening our understanding of how humans exist within those ecosystems.”

The Waterston Desert Writing Prize Award Ceremony will start at 5:30 pm on Thursday, September 22 at the High Desert Museum. Tickets are $7, with a 20 percent discount for Museum members. Learn more at highdesertmuseum.org/waterston-2022.

Inspired by author and poet Ellen Waterston’s love of the High Desert, the Waterston Desert Writing Prize launched in 2014. The Prize recognizes emerging, mid-career and established nonfiction writers, and it’s named in honor of actor Sam Waterston, who provided the seed money for the endowment that helps fund the award. To learn more, visit highdesertmuseum.org/waterston-prize.

The winner of the 2022 Prize receives a residency at PLAYA at Summer Lake, Oregon and a $3,000 cash award.

In August 2020, the High Desert Museum announced its official adoption of the Waterston Desert Writing Prize. Since its inception, the awards ceremony has been hosted by the Museum. The mission and goals of the Prize complement those of the High Desert Museum, emphasizing the importance of protecting deserts and creating important conversations about the issues affecting them.

The 2022 Waterston Desert Writing Prize is possible with support from The Kinsman Foundation.

THE HIGH DESERT MUSEUM opened in Bend, Oregon in 1982. It brings together wildlife, cultures, art, history and the natural world to convey the wonder of North America’s High Desert. The Museum is a 501(c)3 nonprofit organization accredited by the American Alliance of Museums, is a Smithsonian Affiliate, was the 2019 recipient of the Western Museums Association’s Charles Redd Award for Exhibition Excellence and was a 2021 recipient of the National Medal for Museum and Library Service. To learn more, visit highdesertmuseum.org and follow us on Facebook, Instagram and Twitter. 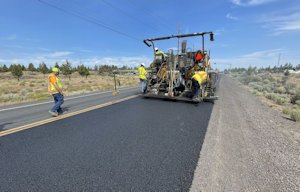