PORTLAND, Ore. (AP) — The U.S. Marshals Service is investigating after a protester was hospitalized in critical condition over the weekend after being hit in the head by a non-lethal round fired by a federal law enforcement officer, Portland Mayor Ted Wheeler said.

In a statement late Sunday, Wheeler said that he spoke with U.S. Attorney for Oregon Billy J. Williams of the investigation.

“I am calling on the federal government to be thorough and transparent with their findings,” the Democratic mayor said.

He said he was concerned that the federal officers’ actions exacerbated an already tense environment in Portland.

Bystander videos show the protester collapsing to the ground unconscious and bleeding profusely from the head after a federal officer outside the Mark O. Hatfield Federal Courthouse fired a non-lethal round at him. The protester was standing with both arms in the air holding a large speaker across the street from the courthouse when he was hit.

He was identified by Oregon Public Broadcasting as Donavan LaBella, 26. His mother, Desiree LaBella, told the station that he suffered facial and skull fractures. He came out of surgery early Sunday morning and was responding to doctors.

“He was awake enough to give the OK to talk to me,” she said. “He’s had some facial reconstruction surgery. They’re just watching him right now.”

The incident was widely condemned in Portland, which has seen violent protests every night following the death in May of George Floyd in Minneapolis. Recent protests have focused almost entirely on federal property, and particularly the courthouse.

“Per U.S. Marshals Service protocols, their internal investigation of this weekend’s incident has now been referred to the Department of Justice Office of the Inspector General. We must respectfully decline further comment on this matter.”

The Department of Homeland Security has deployed officers from more than a half-dozen federal law enforcement agencies and departments to quell the unrest in Portland.

Federal officers used tear gas over the weekend against protesters. The Portland Police Bureau is under a temporary federal court order that bans them from using tear gas unless they declare a riot.

Both of Oregon’s U.S. senators condemned the shooting on Sunday, as did Portland City Commissioner Jo Ann Hardesty, the first Black woman elected to the City Council.

“This reckless and aggressive behavior has now put someone in the hospital,” Hardesty said. “This protester is still fighting for their life and I want to be clear: this should never have happened.”

Last week, Deputy Police Chief Chris Davis said an “agitator corps” of violent protesters were responsible for vandalism and chaos in the city. Davis made a distinction between Black Lives Matter protesters, whom he said were nonviolent, and a smaller group of people he repeatedly called “agitators.” 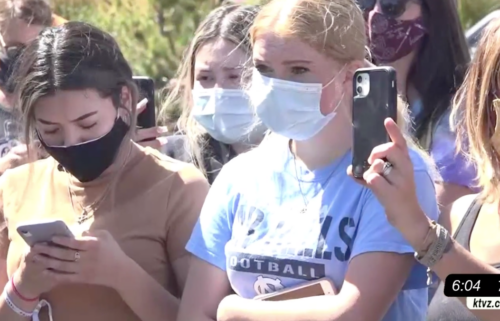 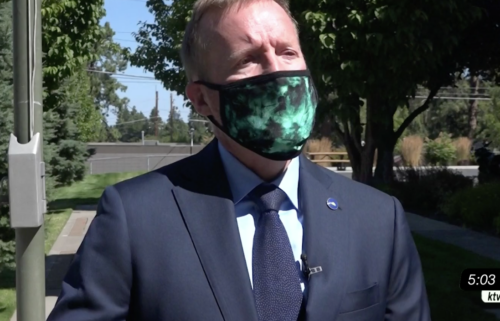