BEND, Ore. (KTVZ) -- As some businesses reopen in Central Oregon, they are ramping up efforts to hire more staff to recover from the financial losses during the COVID-19 pandemic.

But even with the high rate of unemployment, some businesses in Central Oregon say it has been difficult hiring people.

He said he has put out hiring ads for more than a month and has not heard from any interested applicants.

Trammel said he is frustrated people without work are waiting on unemployment benefits, instead of applying for jobs that are available.

Meanwhile, Miyagi Ramen in Bend has job fairs planned for Thursday and Friday.

George Morris, the co-owner and executive chef, said he appreciates the support they have received from the community when they were doing take-out orders only.

Morris also owns Bos Taurus, a steakhouse in Bend. He said between the two restaurants, he is looking to fill 10 positions, which include line cooks, prep cooks and a sous chef.

"A huge motivating factor for the ownership team was knowing good things will come and this will calm down," Morris said. "We knew we wanted to bring our employees back to work."

He said employees in both restaurants were unfortunately laid off due to the shutdown.

"A lot of our staff was from different places other than Bend, so when the pandemic happened, a lot of them went back home," Morris said. "I think that's a big gap of what we're trying to replace."

Morris said they announced they were hiring the day they were approved for reopening in Phase 1 of Gov. Kate Brown's plan.

He said they have received less applications than they anticipated, but he is not surprised.

“A lot of people are getting unemployment right now and feel safe staying home and collecting those checks," Morris said. "Then, there are people like myself that don’t want to stay at home and want to get back to work.”

Morris said he is confident business will get back to normal eventually, with the support of their staff and community.

However, he said business comes second to making sure his employees and customers are safe. 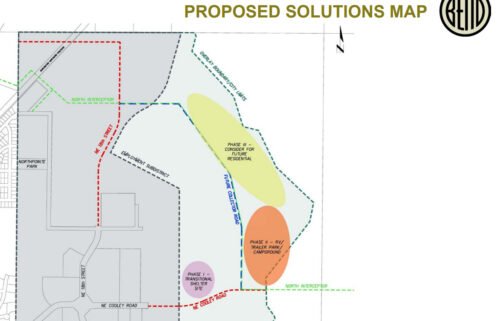