'I hope we do this forever.'

BEND, Ore. (KTVZ) -- As devastating wildfires rage across Oregon, residents continue to fear for their property and livelihoods -- if not from these blazes, then the ones that lie ahead.

Towns and communities have been destroyed, and others looking on from across the state are worried they, too, might lose everything.

Some residents of the Deschutes River Woods neighborhood south of Bend are taking matters into their own hands.

In a proactive effort due to their area's high fire risk, dozens of neighborhood residents gathered behind the Riverwoods Country Store Monday evening, launching a 'fire squad' effort to educate, prepare and avoid disaster.

DRW resident Bernice Gates is one of the neighbors leading the charge.

"We're trying to bring awareness, because our neighborhood is loaded with fuel," Gates said. "Pine trees, pine needles, and some unwanted clutter."

The group was started through a community Facebook page called the "Deschutes River Woods Fire Squad" in an effort to protect residents from the present wildfire danger across much of the entire state.

Residents like Gates are taking extra precautions to avoid the risk of a wildfire starting by removing debris, monitoring tree lines, and keeping an eye out for others.

She said she hopes their efforts inspire other communities across Oregon to come together and be prepared during these unprecedented times.

"I don't know if we'll meet weekly -- there hasn't been firm discussion on how often we will meet. But this will go on forever, hopefully," Gates said.

It may sound like a difficult task, but with dry conditions and high temperatures, this is the reality facing Central Oregon. 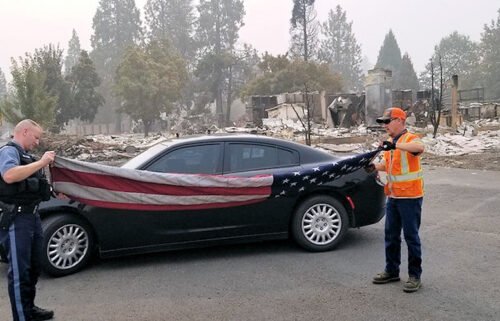