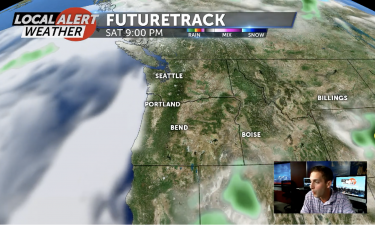 REDMOND, Ore. (KTVZ) – Redmond police released two security-camera photos Wednesday in hopes the public can help them find a vehicle of interest regarding a recent fatal attack on a dog by an off-leash dog at American Legion Park.

“With the assistance of local businesses, we have discovered a vehicle of interest regarding the death of Tucker,” a 10-year-old, black-and-white Havanese dog owned by Debra Slade, that was attacked and fatally injured by an off-leash dog on Oct. 31 at the park, the police department said in a Facebook post.

The unknown dog’s owner retrieved the dog and quickly left the park before officers arrived, possibly in a red 1990s or later Dodge pickup, police said.

The police department said it is seeking the community’s help in finding and identifying the dog and owner responsible for the attack. Officers said they also would like to identify and interview the person who provided Slade and Tucker a ride to a veterinary clinic.

Redmond police said anyone with information is asked to contact the department through social media or the Deschutes County non-emergency dispatch number, 541-693-6911, regarding Case No. 20-89157.