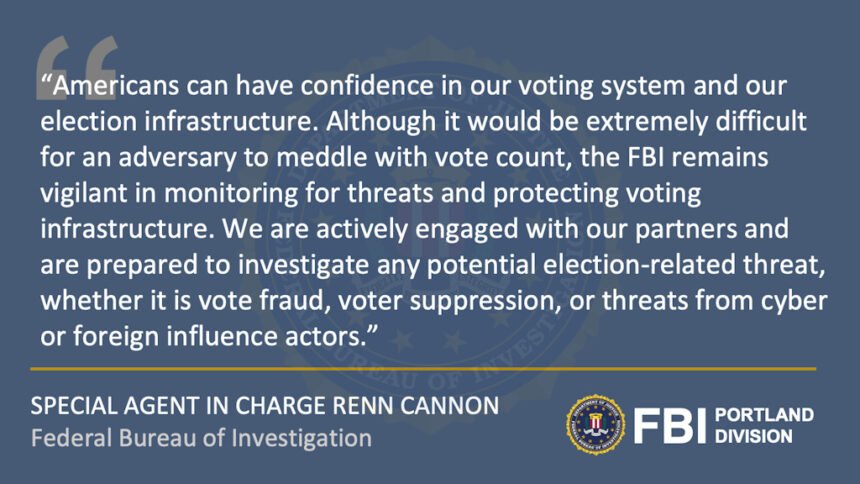 If results not known on Nov. 3, ask 'the American people to be patient'

PORTLAND, Ore. (KTVZ) -- Although Election Day is Nov. 3, the FBI’s work in securing the election begins well before and extends well beyond that date. In the weeks leading up to Election Day, the FBI has been particularly engaged in extensive preparations.

Here's a statement issued by the FBI's Portland Division on Wednesday:

As always, we are working closely with our federal, state, and local partners so everyone involved with safe-guarding the election has the information and resources necessary to respond in a timely manner to any violations that may arise.

“Americans can have confidence in our voting system and our election infrastructure. Although it would be extremely difficult for an adversary to meddle with vote count, the FBI remains vigilant in monitoring for threats and protecting voting infrastructure,” said Renn Cannon, Special Agent in Charge of the FBI in Oregon.

“We are actively engaged with our partners and are prepared to investigate any potential election-related threat, whether it is vote fraud, voter suppression, or threats from cyber or foreign influence actors.”

Our preparations for the 2020 election take into account the current climate of the country. The FBI has a responsibility to plan for a host of potential scenarios. In each field office, one special agent and one intelligence analyst are designated as highly trained election crimes coordinators (ECCs).

Together, the agent and analyst ECCs lead the field office’s efforts to assess allegations of federal election crime, investigate threats, gather intelligence, and serve as the lead points of contact for all federal election-related matters.

The FBI has jurisdiction to investigate election-related crimes when:

The FBI does not investigate:

How voters can help

If you suspect federal criminal activity, we ask that you report that information to your local FBI field office. In Oregon, you can call us at (503) 224-4181 or submit information online at tips.fbi.gov.

Due to the COVID-19 pandemic, we may not know the results of the election on November 3. We join our state, local, and federal partners in asking the American people to be patient.

The FBI is committed to ensuring the security and integrity of our elections, and this commitment does not end on Election Day. We encourage everyone to seek election and voting information from reliable sources, including official state and county elections officials.

For three decades, the FBI has served as the primary investigative agency responsible for safeguarding election integrity and allegations of election crimes and election-related civil rights violations. Our teams of investigators remain vigilant in detecting and investigating anyone who tries to undermine our election process. We have the investigative experience and expertise, and we're committed to supporting our election security counterparts and protecting the American people throughout the 2020 election season.

Oregon voters are encouraged to go to www.fbi.gov/elections or the FBI’s social media platforms to find more resources as well as updated information about election security.